Mary Carroll Nelson has followed separate but interlaced pathways as a teacher, artist and writer. In all her pursuits, Nelson has been a student of edge thinking, especially the emerging paradigm in which barriers between disciplines are dissolving. In 1982 she founded the Society of Layerists in Multi-Media, a national network of artists who express a holistic perspective. Her artwork in mixed media is done on transparent acrylic sheet, which allows light to penetrate through the layers to create a multidimensional illusion.


The author of thirteen books and over 350 articles about art, metaphysics and biography, including Beyond Fear, the teachings of Toltec nagual Don Miguel Angel Ruiz, Nelson is currently working on her latest book, Crop Circles, An Art of Our Time. 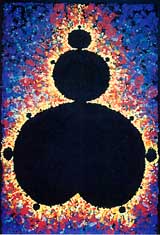 Excerpt from The Art of the Crop Circle, by author Mary Carroll Nelson


"Crop Circles, which I call Agriglyphs, become even more fascinating when they are looked upon as vitally important markers -- signs that are alerting us to the closing of one era in human development and the beginning of an era based on multidimensional consciousness. The late Willis Harman told us that we were leaving behind a "metaphysic" upon which science bases its theories and moving toward a new one. The new metaphysic is the theory that mind precedes matter. Everything that is, began first as thought, a potent, creative form of energy. Humans, as thinkers, are co-creators."

"I believe that crop circles carry coded and urgent information related to the current paradigm shift in thought. They are deliberately visible, space-filling, dynamic patterns no government can conceal nor successfully deny. Crop circles are evidence that a creative, intelligent source is intentionally marking the Earth for the purpose of gaining our attention."

"... I believe the creative thought that manifests as a crop circle originates in anotherdimension. Although a human artist may take the risk of entering a farmer’s field illegally to make a crop circle, the inspiration to do so is likely to be a transference of imagery from a transpersonal source. All creative impulses feel, to those who act on them, as though they came from outside themselves."


"What captures my imagination is the timing of this artform. Never before in the history of art has there been anything to match the creation of these huge designs in nature. Crop circles are a new development in creative expression arriving at a time when consciousness itself seems to be rapidly evolving. Because they constitute a genuine anomaly, agriglyphs elicit our most speculative thinking."